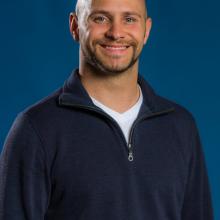 My name is Gent and I am the director of the Los Angeles Urban Program (LAUP). I have worked with Intervarsity for 7 years now, having joined Intervarsity staff after graduating from San Diego State University in 2009 and worked as a campus staff from 2009-20013 at SDSU mainly focusing on dorm ministry and small group Bible Studies. I first experienced LAUP the summer of 2012 when I brought a team of SDSU students with me for the 6 week summer program. That 6 weeks became the foundation of my calling to Los Angeles. I moved to Los Angeles at the end of the 2012-013 school year where I worked as a campus staff at Cal State University Los Angeles. I worked at CSULA for 2 and a half years before getting hired as the next director of LAUP. I live in Urban Los Angeles with my wife where we have found a thriving church community. We both love the city of Los Angeles and what God is doing in it.
Login