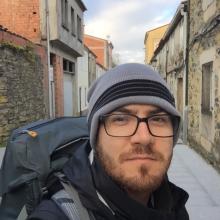 I'm Karl Gurney, born in the beautiful city of Oakland, California, but raised in such diverse contexts as Richmond, Virginia, San Jose, California, and Roseville, California. I studied at Cal Poly in San Luis Obispo, CA and graduated in 2011 with a B.S. in Environmental Science and a minor in Urban Planning. I have campus ministry experience at community colleges in Santa Maria, CA and Fresno, where I currently direct the Short Term Programs for our division. I have 3 years experience directing the yearlong urban program The Pink House. I've always had a love for music, and love a good discussion about the best new albums, artists, films, and literature. I am a practicing Roman Catholic, joining the church in 2013 from a broad evangelical background. My spirituality can be best described as Ignatian and Contemplative, with the most influence coming from the American, Latin American, and British Jesuits, as well as the Trappist and Franciscan orders. If you're curious what that means, hit me up and we'll talk.
Login