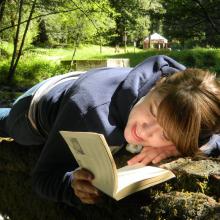 <p>Katye first got involved InterVarsity as a student at UC Davis. During her four years there, she traveled to Mexico City with the <a href="http://globalurbantrek.intervarsity.org">Global Urban Trek</a> two summers in a row, and then directed the Trek the summer of 2010. She moved to Oakland, CA in August of 2010 and interned for two years with <a href="http://www.servantpartners.org">Servant Partners</a>, an organization seeking the transformation of urban poor communities through church planting and community organizing. She has worked with the Urban Projects since October 2010. Katye loves reading anything by Henri Nouwen or Madeleine L'Engle, cooking meals with friends, and practicing Spanish with her neighbors. She blogs about mourning and hope at <a href="http://kmcmylonggoodbye.blogspot.com">kmcmylonggoodbye.blogspot.com</a>.</p>
Login